CITY OF BAYFIELD'S FIRST HERITAGE TREE
​   The City of Bayfield Tree Board has designated the first Bayfield Heritage Tree.  It is a red oak, Quercus rubra, located on the west side of South Second Street, just north of Manypenny Ave.  Probably planted about the time the brick paved street was plated, it is 42" in diameter at breast height, and about 75 feet tall.  It appears sound and healthy.
The street was just restored, the brick pavers taken up and relaid, and new curbs installed, all done with care around the tree.  Tree Board members fertilized the tree with Jobe's fertilizer stakes at their September meeting and the tree has been well watered and received plenty of rain.
The intent of the Heritage Tree program is to memorialize trees that are important historically, environmentally or horticulturally, and to educate the public concerning their importance.  Trees so designated will receive extra care to help ensure their health and welfare.
This first Heritage Tree will be dedicated as part of next spring's Bayfield in Bloom kickoff event.
POSTED BY ART ODE 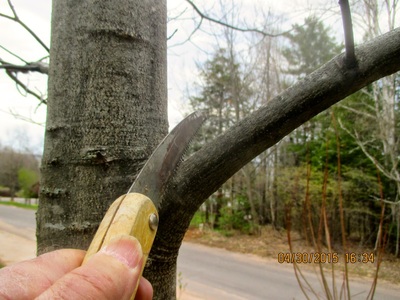 Oak wilt, Ceratocystus fagacearum, is a usually fatal disease of oak trees.  It infects both woodland and cultivated oaks, and spreads primarily by insect vectors, root grafts and infected pruning tools.  In Wisconsin it is mostly a problem in the southern half of the state, but can be accidentally introduced further north.  Red oaks are more susceptible than white oaks.  This native fungal disease spreads mainly in the spring. Fungicides may be of some use, but sanitation is the main control. To help prevent the spread of the disease, oaks should not be pruned until early summer, when the leaves are fully mature.  Pruning tools should be sterilized with alcohol or bleach after each cut.

WHEN TO REMOVE SUPPORT STAKES FROM RECENTLY PLANTED TREES 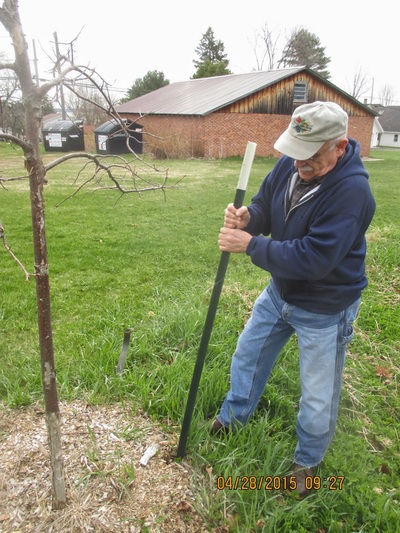 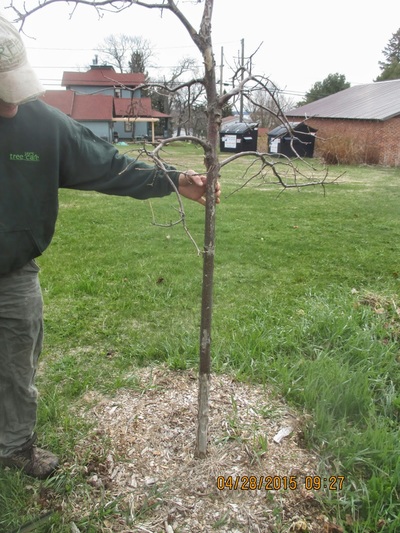 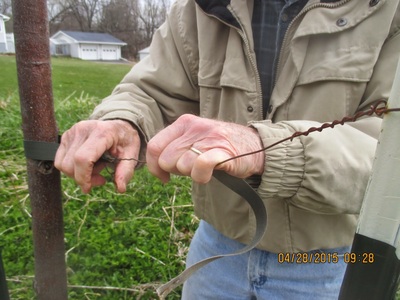 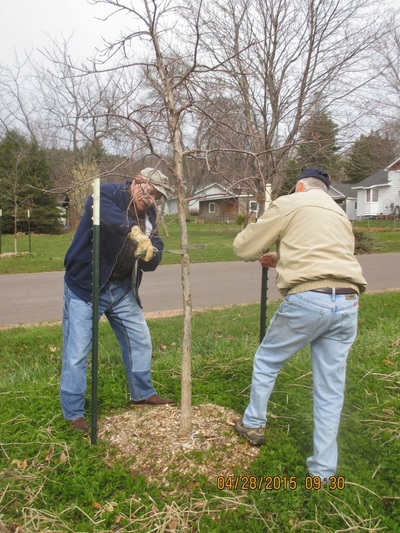 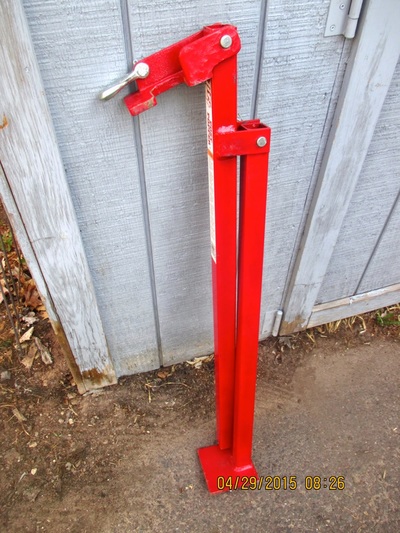 Young trees should be staked when planted, especially in public places where they may be tugged at.  Young feeder roots are easily broken if the tree ball is moved around in the planting hole once the tree is planted and beginning to grow. Two stakes must be used; a single stake does little good and is usually placed too close to the young tree trunk.  Either steel  fence posts or wooden posts may be used, but generally speaking, steel posts are easier to handle and easier to drive with a simple post driver, rather than a sledge hammer.
It is often questioned when stakes should be removed, and we have all seen stakes that were never removed, became unwarranted additions to the landscape and so imbedded in the earth that they were virtually impossible to pull out.
Properly installed support posts should be opposite each other, driven in solidly to the same depth outside the root ball of the young tree, the guy wires taught and the tree straight.  Soft, flat material should be used to attach the wires to the tree.  Rough material that might chaff the bark, such as twine or rope. must not be used, and the material should not circle he tree trunk but only hold it in place from one side.  Rusty stakes should be painted, and bent ones discarded.  Wood chip mulch should be fresh, debris free and no more than  4" in depth, with the area immediately around the tree trunk left un-mulched. The appearance of the posts and guys should be neat and professional, encouraging people to respect the installation of the tree.
Tree stakes and wires should be removed when the tree ball itself is solid in the planting hole. This may take more than one growing season, sometimes two or three, depending on the growth conditions of the young tree.  It is, however, beneficial to the tree to remove the stakes when warranted, as the tree will grow better when it is able to be moved gently by the elements.
Steel posts may be pulled by hand, but if there are more than a few, the job will be much easier done using a simple levered stake puller, available at equipment stores for about $50.00.   There is no point in throwing out one's back at that price.
To determine when to remove the support stakes and guys, grasp the tree trunk and move it gently back and forth; if the tree trunk moves several inches from side to side but the earth around the tree ball does not move, the stakes should be removed: but not before.  If this means that a row of street trees has some trees staked and some un-staked, so be it.  The Bayfield Tree Board removed stakes from about fifty trees at its monthly meeting yesterday.  It took four tree board members about an hour to accomplish the task. 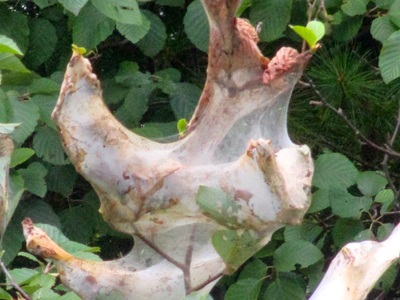 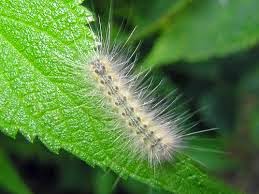 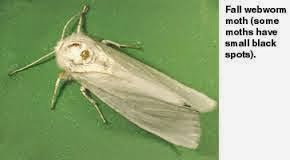 The fall web worms are caterpillars of the species Hyphantria cunea, that feed on apple and other mostly hardwood trees while protected inside a silken web that they spin.  They are yet another sign of approaching fall.
There are several quite similar races of these insects, and if the season is long enough there can be more than one generation which feeds on tree foliage. The adult of the aforementioned species is a white moth about an inch-and-a-half in length.  The insects overwinter in the pupae stage, in leaf litter.
Like the tent caterpillars that appear in spring, they do little real damage to their host trees other than causing them to be unsightly.  The spring tent caterpillars feed under silken "tents" as well, but the webbing is located at the crotches of young branches, the "worms" emerging to feed on host foliage and retreating to their webs for safety.  The fall web worms feed within their webbing, which encompasses terminal branches and leaves.
The easiest and most environmentally neutral control of both tent caterpillars and fall web worms is to cut out the branches and foliage covered by the tent or web and burn or bury them.  Insecticides are hard to use on these pests because they are so well protected.  If one is not squeamish they are also easy to destroy by crushing them by hand inside their webs, if they are within reach.

R.I.P.    The huge old white pine that came down in a brief windstorm on April 29 was finally cut into manageable pieces and taken to the city refuse yard, where  much of it will be cut and split for firewood at Dalrymple Park Camp Ground.
I was able to make a more accurate count of the tree rings yesterday, this time at the base of the trunk and with a better saw cut. I counted them twice and came up with ninety both times so that is a pretty accurate estimate of its age, although the outer thirty or so rings were very close together and therefore difficult to count. If I erred it is on the low side and the tree may be 95 or so.  The tree was pretty obviously planted when the adjacent house was built, or a few years after.
The tree grew quickly in its youth, the first half of its life, as much as a half inch in diameter each year for the first forty or so years, and thereafter most annual  growth was an eighth to  sixteenth of an inch or even less.  There were a few years here and there of better growth in later years, but not many.  Each ring, counted out from the center, represents a year's growth, and since the increase is in diameter the measure of the growth ring has to be doubled to give the increase in girth for each year.  In  a good year the tree grew an inch or more in diameter.  The diameter measured 35" at ground level and 118" in circumference.  The average yearly growth in diameter was .39".  The tree laying on the ground was almost 90' in length as well as I could estimate, which translates into an average growth in height of one foot per year during its life, and twice that rate when young.
Ninety years is a long life for a tree in a city environment, where road and sewer construction cause root damage, trimming for utility wires is brutal, and there are less than optimal growth conditions; but in nature a white pine may easily live two hundred to three hundred years.
This tree broke off at the roots, which appeared to be brittle and dry-rotted.  I could find no obvious injuries, and it was not infected with white pine blister rust.  The trunk was not hollow or rotted that I could see, although it cracked internally when it fell.  I saw no obvious cankers, or wood rotting fungi fruiting bodies.  I think whatever weakened it to the point that it fell in a freak wind storm happened many years ago, probably forty or fifty years ago when the growth slowed dramatically.
All living living things, including ourselves, are the sum total of their  existence, and eventually  that burden brings them down, and few get to live out their full genetic potential.